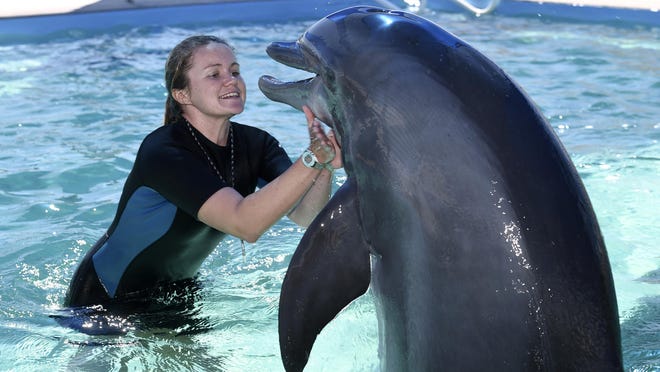 The staff at Gulfarium Marine Adventure Park determined Monday that the newest and ninth addition to its California sea lion community is a healthy girl, weighing 16.5 pounds. The unnamed sea lion pup was born Friday, but staff gave the pup and her mother, Tabby, space and time to nurse and bond before weighing her and determining the gender.

What made Friday even more special was that Tabby turned 8 that day, meaning she and her pup will share a June 25 birthday, said Bryan Martin, the Gulfarium's director of animal management.

“We're really, really grateful for the pup,” Martin said. “Mom is doing a great job, so really it's just doing observations and then making sure mom has what she needs. We give her food — however much she wants — until she tells us she's done, and she takes care of the rest.”

Mary Kate Northup, operations manager at the marine park, said it likely will be several months before the pup is available for public viewing. People can follow Gulfarium’s Facebook, Instagram or YouTube for “pup-dates.”

Tabby is an experienced mother.

This was Tabby’s second pup born at the Gulfarium. Her first was Maddie, who arrived June 17, 2019 — summer births are common for sea lions, Martin said. Maddie now gives presentations and meets guests.

“Tabby was excellent when she had Maddie, so we followed what we had done with her before,” Martin said. “We have a maternity suite, which we built specifically for her. There's a pool and then there's a decking space we can close off so it doesn't have any access to the water, so Tabby can feel more secure and not worry about the pup wandering around too much.”

Friday, when Tabby started showing signs of losing her appetite, which is normal for a female sea lion before she goes into labor, staff decided she would spend the night in the dry closed-off area, where she would feel secure, Martin said. They had a watch team check her behaviors regularly to indicate if a pup was on its way, he said.

“They ended up calling me, letting me know that Tabby was making some of what we call ‘pup calls,’ ” Martin said. “I came in, it was about 3:30 in the morning, and she went into labor and had this new pup within 22 minutes — whereas the first time, it actually was three days in advance that we started hearing her do pup calls. So she is so experienced, she sped the process up.”

It was a special experience for Martin.

“It's a part of our careers as animal care professionals, but you just don't know if it's ever gonna happen,” Martin said. “We're always excited for it. We love all of the animals that we get to work with, but to be around and know that you've been caring for Tabby, Eli, the other sea lions, to see them end up having children of their own and then you get to watch that pup or that baby penguin grow up is really so special, because you knew that animal from the start and it’s just amazing. It's an amazing experience.”

The birth was quick, Martin said. And like other mammals, sea lions have an umbilicus, or a belly button, and it broke like it should, he said.

“The pup started to immediately vocalize, showing us all signs that things are great,” Martin said. “Tabby immediately turned around and started nosing and nuzzling the pup, calling to it, being very protective of it, showing everything that we're hoping for a successful mom.”

The pup nursed within the first hour. Then, three hours after the pup was born, Tabby passed the placenta. They collected and froze samples for testing and determining which sea lion was the father. There are three viable options, but they suspect the father of the new pup is the same as Maddie’s: Eli.

Right now, the staff will give the mother and daughter space, Martin said. Tabby has the option of jumping over a blocker into a water, which is what gave them the opportunity to weigh the pup, Martin said.

“If she wants to break out and stretch out, just like a sea lion in the ocean would,” Martin said. “Mom would go back to the ocean and the pup would hang out on the beach, we've created the exact same situation.”

More like this:Want to chill with baby penguins? New encounter coming to Gulfarium, but only for limited time

When they start to show a little bit more independence with each other, the staff will let Tabby join the other sea lions for small time increments.

“That gives the pup a chance to play in the pools that we have back here,” Martin said. “We can start doing some swim classes, where we let the pup play and we have our staff hanging out in the water, which is also fun for our staff. We’ll start to offer small fish and fish pieces so the pup can investigate and start to play and learn to eat fish. So we really follow a natural progression in terms of mom going out, grabbing some more fish, coming back and taking care of the pup more often in the evening. It’s a great system we have here. And it's a great celebration for our staff and the whole Gulfarium team.”

The new pup's name is still under wraps.

“Now that we know (gender), we put that out there and we're giving the staff a chance to maybe think about the names that might mean something to them or make sense in terms of California sea lion natural history,” Martin said. “And then we'll all come together and we'll choose one that we all like.”